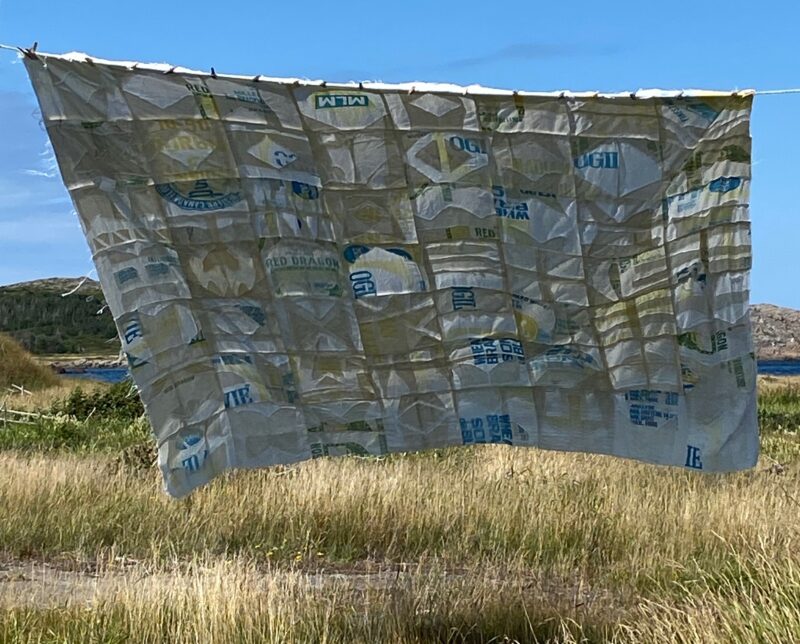 The Fish Blanket is made from 64 of the codfish-shaped windsocks that flew in Port Rexton at the 2017 Bonavista Biennale as part of Re-Seeding the Dream East. Picked apart stitch by stitch, each fish was eventually sewn into a square and were pieced together to form what was intended to carry both past and future… a reminder of the fish that used to be and a projection screen for those that would fly again. As a blanket it claimed its own life on the line… flying in the North Atlantic winds. 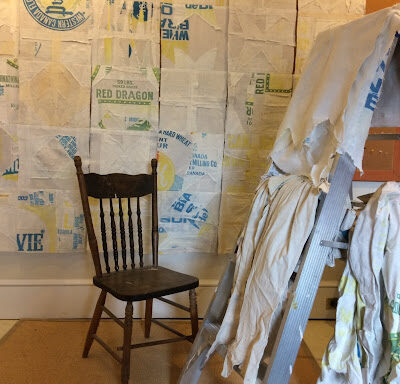 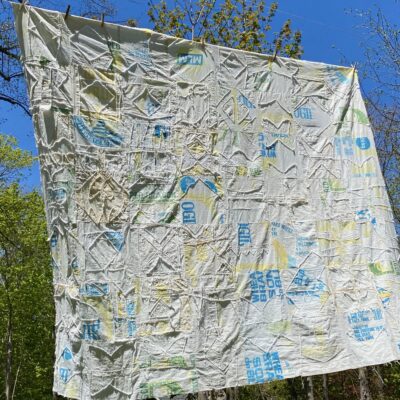 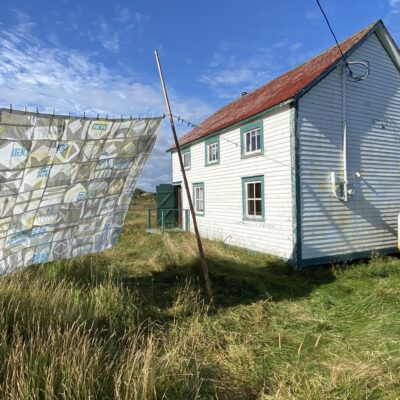 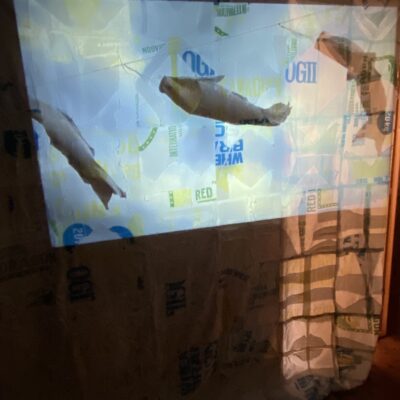 The blanket first flew in St. John’s and most recently in Tilting, during Pam’s recent residency there. There, for the first time, it served as a screen to reveal the fish flying in the meadow of the Reardon House.

During the pandemic Hall also began to pick apart her collection of vintage aprons stitch-by-stitch. It was peaceful work, this un-making. She stacked ties and pockets, skirt and waistbands – she ironed and sorted – and eventually things wanted to go back together. She pinned and arranged and re-arranged and finally decided to stitch all the pieces together by hand.  She sewed most of blankets standing up with the pieces pinned to the wall in her studio. And so the blankets emerged – made for the line, for the wind and for wrapping her up in work memories of other women. 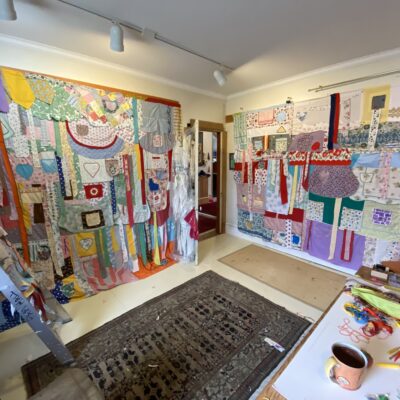 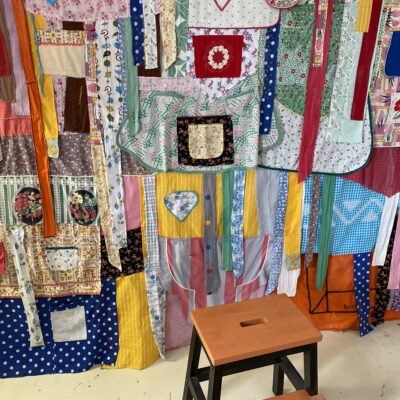 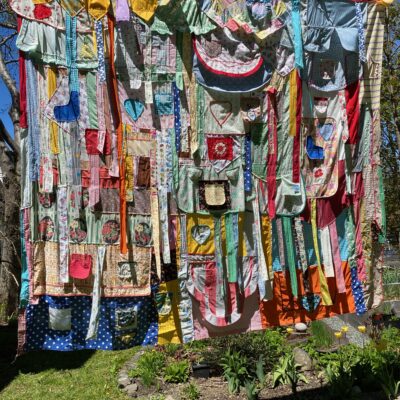 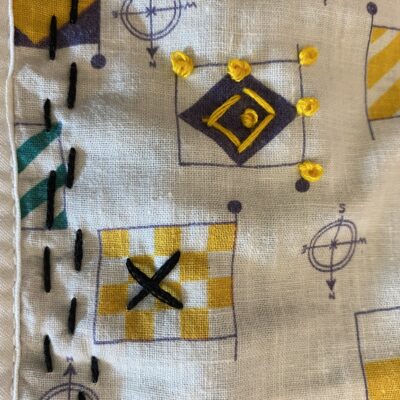 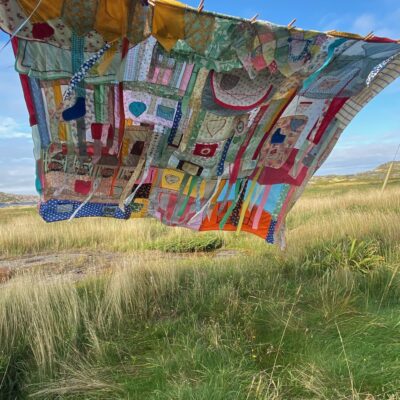 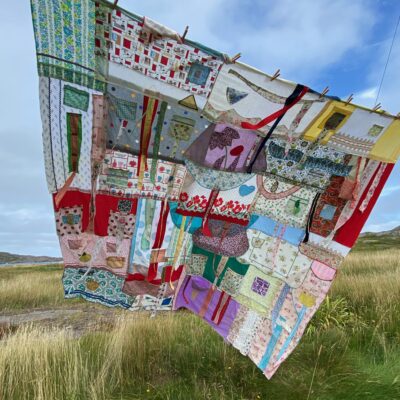 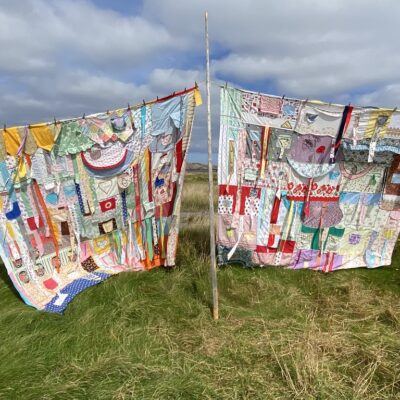 The blankets are performative on their own, but intended for wrapping and warming women with the memories of women’s work. The labour here is clear and sweet… echoes of the kitchen work these aprons tended to, of the work invested in making the apron, the artist’s work in unmaking and re-making , and also the laundry lines in the wind that are so emblematic of rural life.  The wrapping and warming and  story-work that will emerge have only just begun… taking the blankets on bodies out onto the land to dance without lines in the wind. Thanks here to Tanea Hynes for lending me her labour, her eyes and for being the body-in-the-blanket for the first live work at Salmon Cove beach and Grates Cove in 2021. 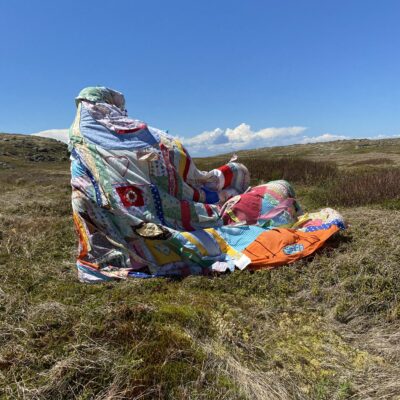 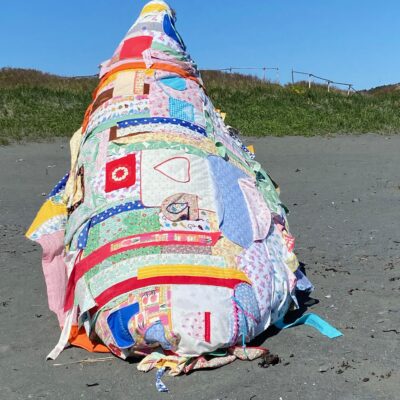 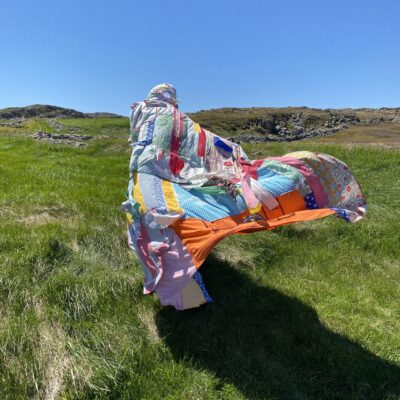 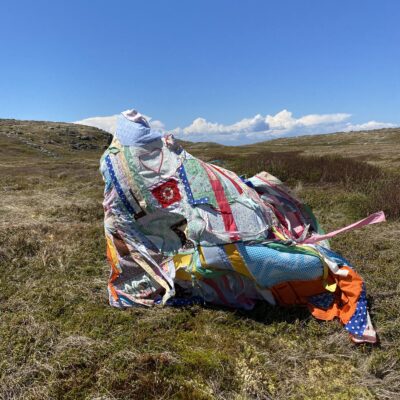 Dressing Up Work: The Apron Diaries

2006–ongoing. For over three years Hall collected used aprons as the "material" for this large scale installation project.

2021. Invited to fly her fish there, Pam accepted an Artist Residency in Titling, Fogo Island. Closing the circle on a 25 year old project, ReSeeding the Dream, Pam revisited this work a final time. They flew on lines, they flew as a blanket and they flew as projected images on a historic fishing house in a magical meadow by Sandy Cove, NL.